Posted by hakanl in Uncategorized on May 5, 2015

This article describes how to configure a Texas Instruments CC2543 or CC2544 radio to receive traffic from a NRF24L01+ chipset.

I used the RF24 library and the included sample to send a known packet between two NRF24L01 nodes. The sample code is linked above. I basically configure it on the network address, address with, data rate as I want to mimic on the TI chips, then send a 10 byte packet with data that’s easy to find in a bitstream (0x55, 0xAA, will be alternating 010101010) since we may not capture the data aligned exactly on a byte level.

Once I had the two NRF24 nodes communicating I set up the CC2543-CC2544 DK with the SmartRF Studio 7 under Packet RX. 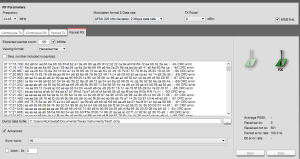 The key to get it to capture the NRF24 traffic is in all the register settings, to make it behave like the NRF24 when it comes to sync words, packet format, etc. I’ll list out all the registry settings that are relevant here.